This is my favourite feature of emacs-eclim , the ability to get real, 100% correct auto completion of everything, without clever hacks like hippe-expand and vanilla auto-complete-mode:

On the fly syntax checking

Since very few of us can remember all the nuts and bolts of the vast Java class library, not to mention all the brilliant and esoteric 3rd party APIs out there, Emacs offers just the thing we need: on the fly syntax checking. It will underline plain compilation errors in red, whereas Java warnings will be underlined with yellow marker: 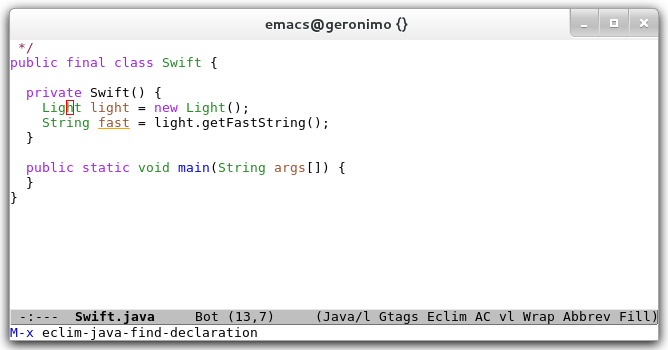 When invokingeclim-java-find-declaration, you're instantly taken to the class in question (here open in a new buffer): 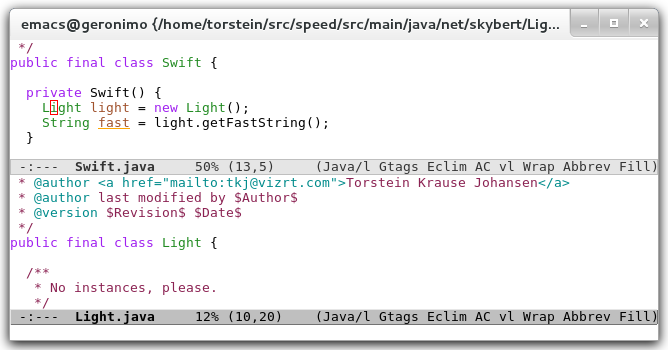 It's often useful to see all references to a given method or class. Put your point at the class name or method in question and call the commandeclim-java-find-references:

Java developers love refactoring, especially changing the name of variables and methods is something many of us do all the time. Emacs will happily do all of the work for you if you just navigate to the method, class or variable in question invoke eclim-java-refactor-rename-symbol-at-point:

Emacs will then make all the required changes in all files in the project:

Getting help wherever you are

Put your pointer on the class or method you want and call eclim-java-show-documentation-for-current-element: 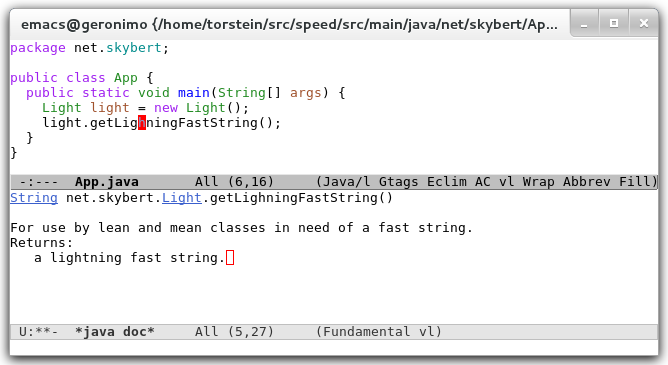 Emacs will quite happily show you a class' or an interface's inheritance hiearchy if you invoke eclim-java-hierarchy: 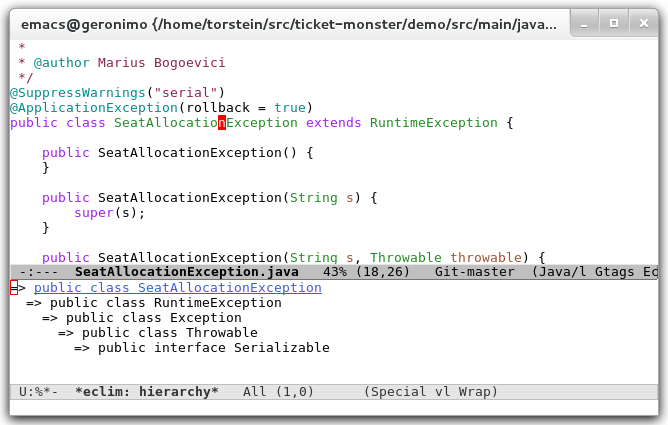 Emacs will import any missing classes and re-organising the imports while it's at it when you call eclim-java-import-organize:

For the most part, this will work without an itch, the exception being ambiguities likejava.util.List andjava.awt.List:

A feature which makes Java IDEs so appealing is that they suggest fixes to various problems in your code. In fact, this feature has gotten so good, many Java developers rely on it as a way of programming. Instead of creating methods and variables before using them, they instead rely on the IDE to create them as they refer to new methods or field members.

Many will be very surprised to find that Emacs now also has this feature, here's an example where the code refers to a not yet written method:

Invokingeclim-problems-correct opens up another buffer in which you may preview the different suggestions and before applying them with the suggested fix's number (0-9): 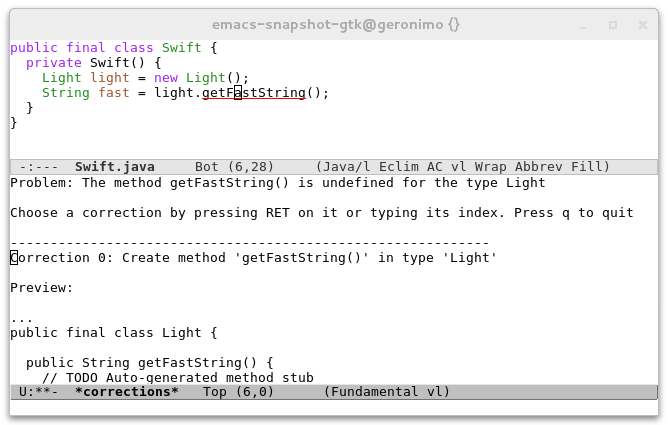 After hitting0, the method is added to the correct class:

Using the excellent nxml-mode, Emacs gives you both on the fly syntax checking (or XML validation if you will) and auto completion when editing your POM files:

Wherever you are in your Java project, you can always invoke eclim-maven-run to run any of the Maven goals. Any errors, be that compilation or unit test failure, can be clicked on for instant viewing of the offending code in the editor: 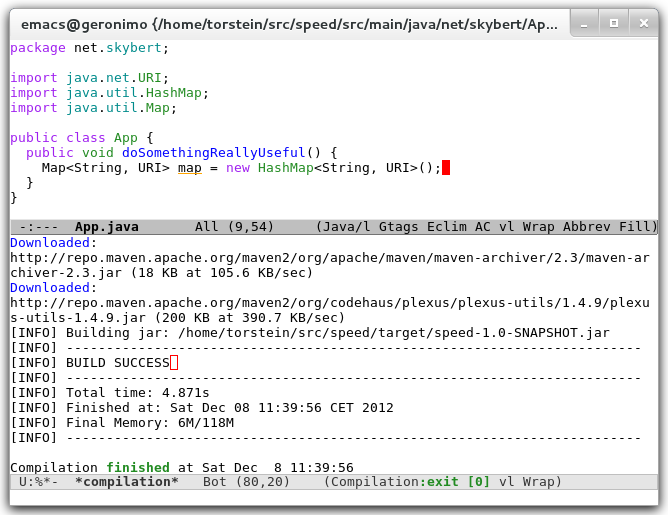 The source code control integration in Emacs is second to none. It's extremely fast and supports just about all systems out of the box.

You don't have to worry about which backend you're using, Emacs will let you do all the checkins, checkouts, annotations, diff-ing and so on using the same commands, regardless if you're using CVS, Subversion, Perforce, Git or Mercurial.

One the fly display of Checkstyle and PMD violations

Using flymake and a wee command I wrote, it's easy to get this into Emacs.

Having PMD, Checkstyle & friends running under Flymake also doesn't hinder your work in Emacs. Flymake runs in the background and doesn't block any thread in Emacs. It just updates the error/warning highlighting whenever it's ready. I find that running PMD with all checks enabled and Checkstyle running with a full Sun coding standards checks set, Emacs/flymake is snappy enough, with new updates coming in 1-2 seconds after I save the file (the old check markings are left until the new are available).

One PMD check I'm particular found of, is javabeans. It will spot if you have a getter but no setter for a member variable, or more importantly, if you have misspelled your getter or setter. This is the kind of bug you will often first spot in runtime when your JSON serialisation isn't working and you wonder why on earth isn't it?

To get the code completion, code navigation, javadoc lookup and so on working, we need to set up this call flow:

Next stop is the excellent "Eclipse to Any Editor" bridge called eclim (its first class citizen is Vim, but we can use it for Emacs too). It lets us get all the goodness of Eclipse (code completion, refactoring, syntax checking++) in our beloved editor with no extra configuration, hacks or fuss.

I install all 3rd party sources in/usr/local/src to differ them from my own sources in~/src, thus:

This will install theeclim plugin in our /opt/eclipse directory, with symlinks to the two eclim binaries in the root (that looks a bit messy, doesn't it? Oh well, the important thing is that it works :-)):

If you like me, prefer launchingeclimd from a dedicated shell, be sure to set up your workspace directory in .eclimrc if it's different from ~/worskpace. Here you can also assign more memory toeclimd:

If you're using a non default location for your workspace and you don't set the workspace directory here, you'll probably get confused as to wheneclim does and does not find your projects. I for sure was!

The last piece of the puzzle, is the excellent Emacs eclim library which acts as a bridge between Emacs and the eclimd process.

At the time of writing (2012-12-01), there's no Emacs package ofemacs-eclim, hence, I put it with my other Emacs modules that are neither installed with APT nor with Emacs packages in/usr/local/src/emacs. Hence:

Finally, there's some Lisp to set it all up. I've put this in my ~/.emacs.d/tkj-java.el , but you can of course put it anywhere you like, like~/.emacs :-)

First off, install checkstyle with #apt-get install checkstyle (if you're on a Debian based system, or else, get it with your package manager, or set it up manually so that you have thecheckstyle command wrapper in your PATH) and make PMD available in/opt/pmd:

Then, get my command my-java-flymake-checks or write your own. Then put the following in your .emacs to wire it up:

Setting up a project to use eclim

After intsalling eclim, emacs-eclim and adjusting your Emacs configuration, the time has come to make use of it all with your Java project. There are definitely more than one way of doing this, but this is what I find the easiest:

and enter the name of the project and its base directory. Mutli module project works too. I'm currently using this on a three level deep Maven project structure with more than 2000 java source files and it works fine, albeit not perfect. In general, eclim will not help you with anything if there's one file somewhere which doesn't compile.

And this is it. eclim should now be able to figure out which project your current java file in Emacs belongs to.